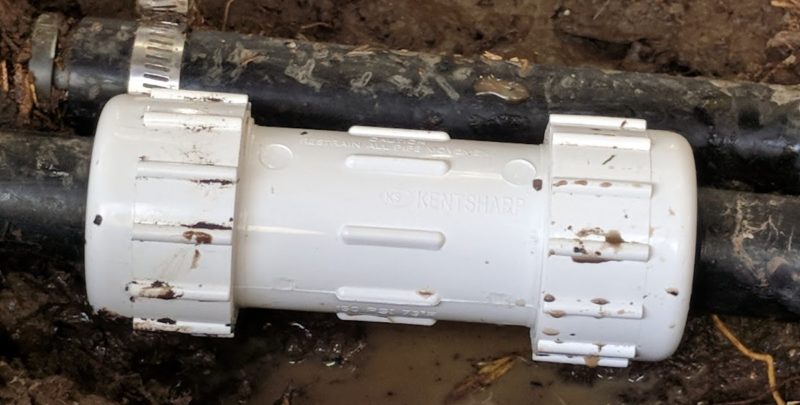 When your sprinkler pipes are first being put into the ground during that very first instaliation, the joints are probably going to be installed using  solvent comment fittings. That being said, when you are trying to put on a new piece of pipe to repair a broken segment this is probably going to be a lot harder. What makes it so hard is that the sprinkler pipe is already in the ground and cannot easily be moved around to create enough slack for the replacement pipe to be put into place.

If like me you are on the search for how to repair a broken sprinkler pipe, you may have already been on a few sites that are going to recommend taking a brand new piece of pipe, using messy pipe primer and then putting in a repair coupling. This way works for sure, but is certainly not the easiest way to replace a broken sprinkler pipe.

I thought I had fixed my sprinkler system issues when it came to replacing a few heads around the yard, but I could not be further from the truth. The other day, my neighbor knocks on my door and asks me where the lake in his backyard is coming from?

I had no idea!

Little did I know, the sprinkler pipe under a bunch of bushes (trees at this point) had actually broken off a head and was flooding out underground and straight into my neighbors yard. Time to repair the line!

What You Will Need

Some people will recommend a pair of pliers or vice grips, but if you are using the simple compression couplings we recommend, you should be able to hand tighten them.

The very first step is to actually find the leak in the area. The leak in my own line was under a bunch of 20 foot tree bushes. I had to crawl under these to actually dig out all the dirt and pine needles that had fallen in order to figure out that I had a sprinkler head there! What I learned seconds later was that this sprinkler head was actually disconnected from the main sprinkler line.

As you can see, there is a single hole here where the head should be. Sometimes you may experience a broken line because of animals, tree roots, or any number of reasons. No matter what causes the issue, the fix is pretty easy.

Step 2: Get The Pipe Ready

You will want to cut out the actual hole from the pipe.

This sounds a lot easier than it actually is. I went to the garage to get the box cutters and as soon as I tried cutting through the pipe, the blade snapped!

Since we just moved in and I have close to zero tools, I opted for the saw on my swiss army knife. If you are a more established home owner, you will want to grab a hand saw or a sawzall. Either way, the work was pretty quick. 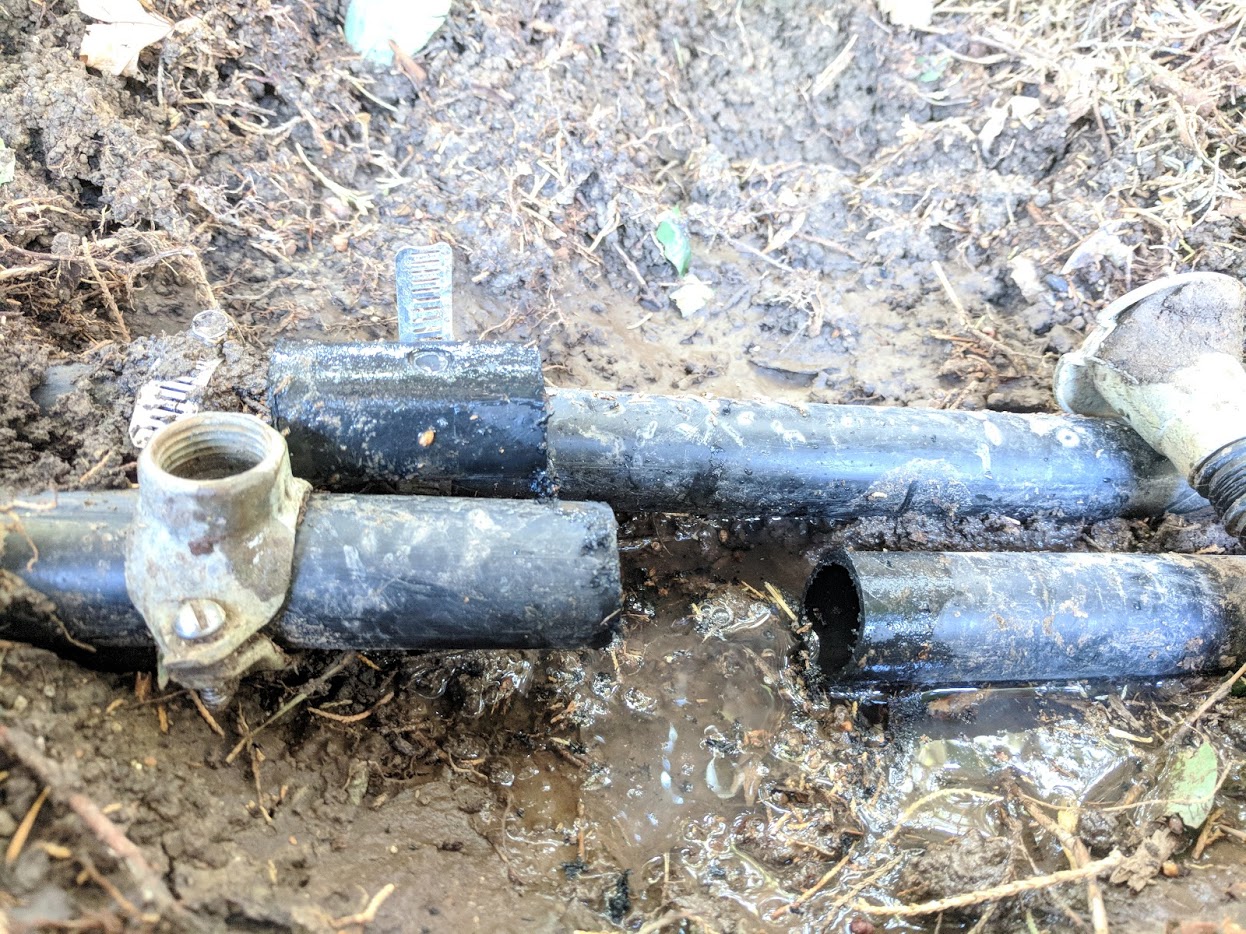 At this point, it would probably be a good idea to clean either side of the pipe to get ready to insert the coupling.

The best part about this easy way to fix broken sprinkler pipe is actually how simple it it. You should grab a compression coupling for the store

NOTE: It is very important that you actually measure the pipe that you have installed in the ground. I read that most professionals install 3/4 inch pipe when installing an in ground sprinkler system, but when I got back to the house with a 3/4 inch compression coupling it was too small! Measure first people!

The coupling is made out of two slide washers and two plastic nuts.

Unscrew the coupling and put put both plastic washers onto the pipe. These are the white parts that you screw on and off. Next, put the plastic nuts onto the pipe and screw everything into place.

The last step here is to tighten the fitting with your hands and then check the seal.

You can check the seal of the compression coupling around the sprinkler pipe by flipping on your sprinkler system and seeing if any water is coming out. What I noticed the first TWO times that I did this was that there was water leaking out of both sides of the coupling.

The easy fix was to put everything back on but not overtighten! Overtighting the coupling can cause the plastic nuts to move on the pipe and remove the seal. Hand tighten until you cannot move it back and forth and it should be good to go! 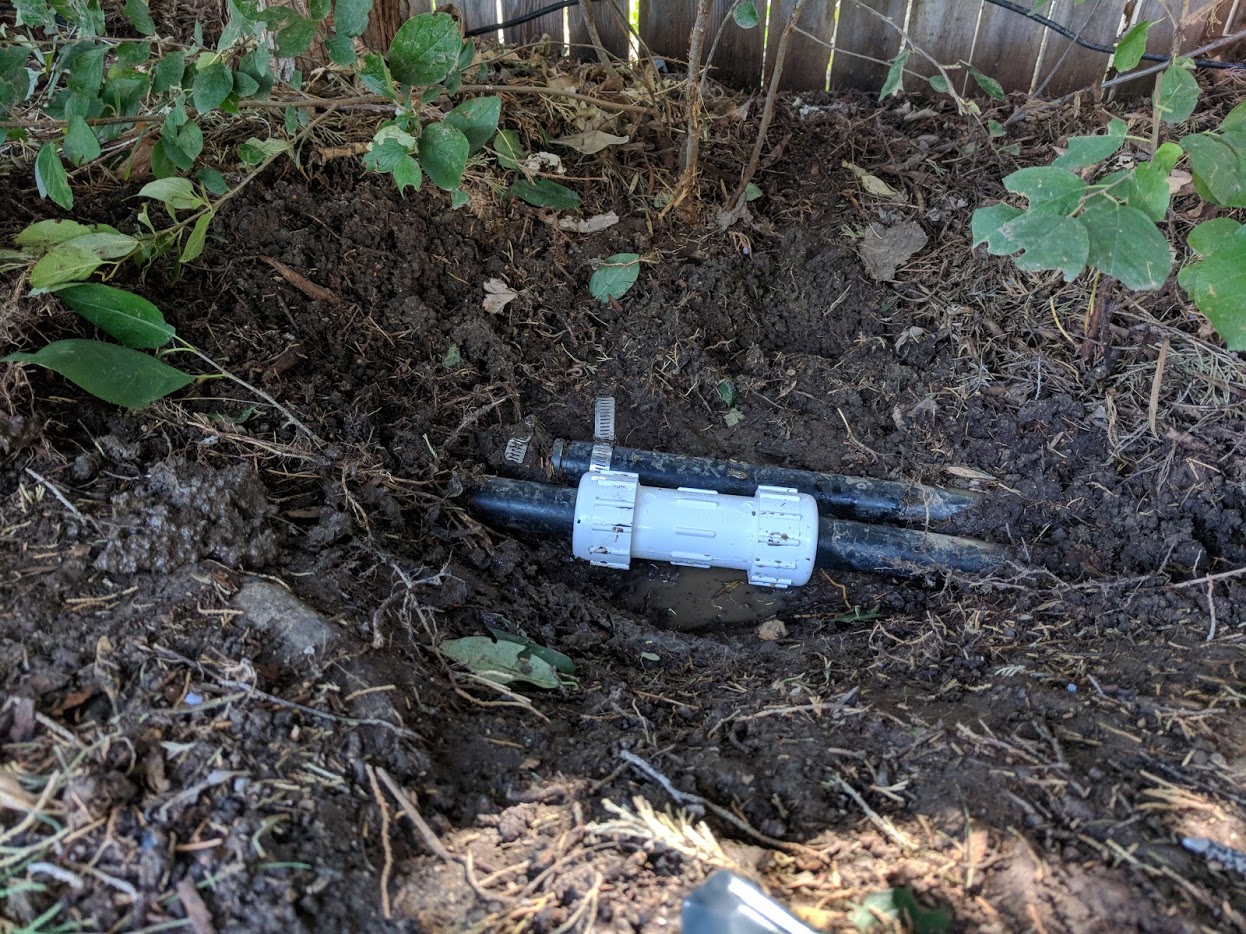 When you turn on the sprinkler system and you do not see any more leaks, it is now time to actually cover up the hole with dirt, and enjoy your sprinkler system. It may be smart to let the water run for 10 minutes or so just to ensure there is no more leaking.