Removing a shower arm is typically very easy, but after I tried simply untwisting the stuck shower arm from the wall, it became obvious this had been in the wall for a good 40+ years and was not going to be that easy.

You may need to remove your shower arm for all sorts of reasons. It will typically be to fix a leak or simply to replace it like we wanted to. When the shower arm has been in the wall for some time, it may have some mineral scale build up or rust at the junction between the arm and the pipe in the wall. By following the steps laid out in this guide, you should be able to remove a stuck shower arm without getting a plumber or being that frustrated like I was.

Step 1: Turn Off The Water Flow

Just to cover all your bases, you will want to turn off the flow of water to the shower. Some sh owers have a flow valve located in the access panel behind the shower, but you can always turn the water off to the house or just the bathroom depending on how your house is setup.

Step 2: Twist The Shower Arm Off

Most of the times you can simply grab the shower arm with your two hands and twist it off. Remember, twist to the left to the loosen. However, you would not be here reading this article if it was that easy!

If the shower arm is not simply twisting out, grab a towel and place it over the shower arm. This will help protect the finish and also give you a little bit more grip. If you cannot get it by hand, grab a vise grip and place it around the arm and begin twisting. If it is still not coming out easily, stop turning it so you do not snap anything!

It is a bit easier to get a ladder for this step, but somehow you need to get up there and look at the shower arm at the junction of where it is coming off the shower riser pipe. Look at that joint and see what you can see. If you see any amount of brown spots on the chrome, this could mean that the shower arm has become corroded and is now rusting which is why it is so hard to get off. However, you may see some white spots. These are mineral scales and also can make things harder to remove. If your house has hard water with a high mineral salt content, this is probably the reason you are having an issue.

For either of these two problems, you will want to remove the rust of mineral scale from the shower arm. Pour some vinegar into a bowl, soak a small cloth or rag in the vinegar and then put it around the shower arm for 15 minutes. This should loosen up any debris in the way.

If that does not do the trick, it may be time to grab some limscale remover. You can pick some up from Amazon here.

If that does not work, OR you simply cannot get to the joint to wrap a cloth around it, there is still a solution.

If you have tried everything in this article and the shower arm just will not budge (like mine), it is time to bring out the big guns: the adjustable pipe wrench. I picked up the Husky brand pipe wrench because of a life time warranty and it actually was the cheapest one on the shelf. You can grab one on Amazon if you have a few days to spare. 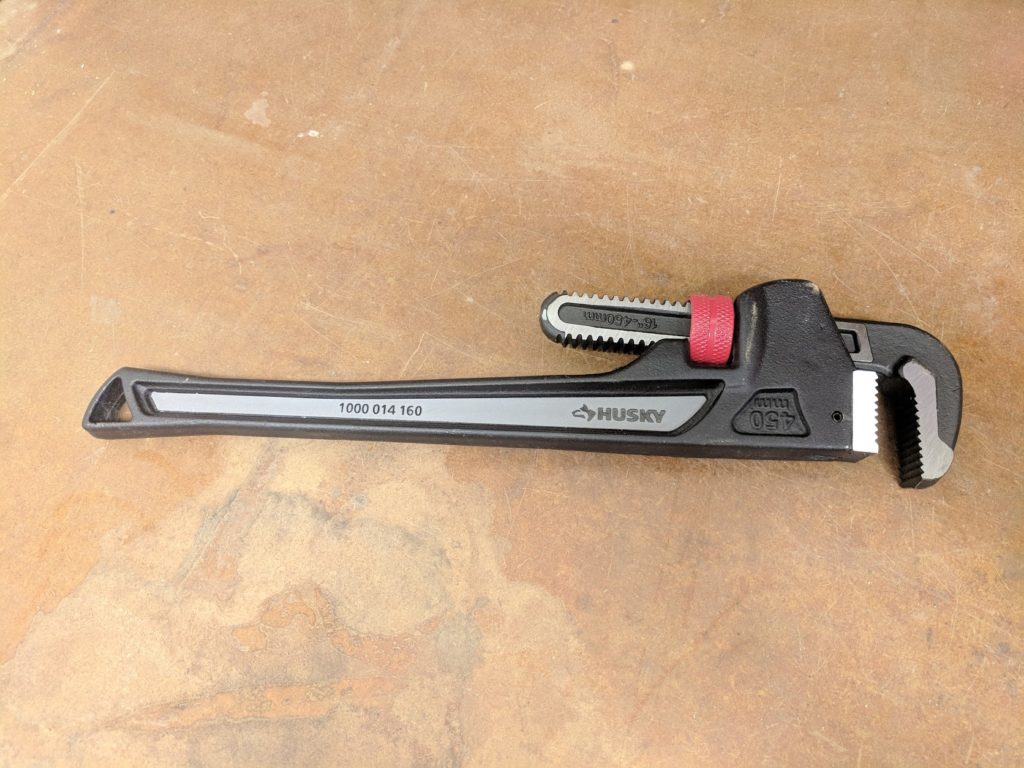 You may ruin the shower arm using this method, but at least it will be removed where you can then replace it with a nice and shiny shower arm that will last for years to come.

Once the old shower arm is off, you can easily replace it with a brand new one. All you need to do is purchase a new shower arm and some plumbers tape or Thread Seal Tape.

Place at least 2 full wraps of the thread seal tape around the threads of the shower head that will be going into the wall. This is going to cause the seal that will ensure no leaks happen in your wall.

Line up the sealed threads to the shower riser pipe in the wall and turn to the right. Typically you can hand tighten these new arms. You should now have your new shower arm installed and ready to add a new shower head!

Getting a shower arm unstuck from the wall can be difficult if you do not have the right tools. However, there is really no need to call a professional plumber and spend a bunch of money. Just grab the right tools, and after a little trial and error, you can easily remove your stuck shower arm.